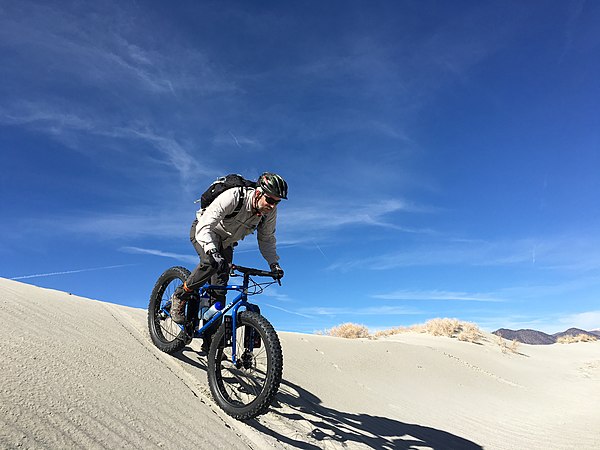 Biking is a great way to get around and is one of the healthiest means of transport that is easily accessible to anyone and everyone. Unfortunately, sometimes there can be many hindrances that prevent you from using an ordinary cycle as a means of transport, especially when it comes to snow. This is where over-sized monster-cycles known as fat-bikes come in. Fitted with larger tyres to tackle terrain that an ordinary bicycle will be unfit for, a fat-bike is taking certain parts of the world by storm. Even places in the Middle East such as the Qasr Al Sarab Desert Resort by Anantara are utilising fat-bikes in Abu Dhabi excursions since they are able to tackle rocky-terrain as well as sandy-dessert.

Fat-biking became increasingly popular during 2014, and now top athletes around the world such as cycling champion Rebecca Rusch, are using it as a means to indulge in their favourite sport during harsh weather conditions. Given the additional weight associated with a fat-bike, it requires exponentially more effort to manoeuvre them. As a result of this, many cyclists find it far more effortless to ride a normal bike once conditions enable them to.

Due to harsh cold winters in certain regions, many would find themselves gaining weight over this season as it makes the usual options of physical activity almost impossible. Fat-biking provides a fun and ideal way to stay fit during the winter holiday seasons, and you’ll be burning more calories than riding a normal bicycle. Exercising in the cold has also been proven to utilise more calories as the body struggles to stay warm, a process that burns an additional amount of calories.

According to endurance racer Jack Wade, the fat-biking teaches how to ‘truly ride a bike’, and increases one’s level of braking, endurance and cornering. If you enjoy cycling and wish to take it up a notch, fat-biking is definitely something to consider.